Today, Mark let me start. It took me hardly two minutes to get him to full erection, though I have to admit (I know you men will stand back hands on hips and growl when I say this but… ) I was kind of grumbly that he got so hard so fast. I like to deep throat him as he hardens, and frankly, it’s easier while he’s medium hard. Once he’s rigid, it seems to hurt him a bit if I go too fast, and I can’t take him as deep without concerted effort. We both joke that he’s going to be a well eaten old man someday. I must admit that I’m quite OK that his leaning tower of Texas is not quite so stiff as it once was all the time. It’s more than hard enough for what matters and just a bit easier for me to give him a better blow job.

I climbed on and lay my tummy and torso down on his, taking his cock and balls in my hands, kissing him and licking his shaft.

“Dare me to put wasabi in my mouth now?” I giggled. That got my already striped, sore backside smacked a bit too hard several times. Enough to make me wince and complain. That activity was spicy alright, but what really got things going today was what Mark got up to once I returned my attentions to what I was supposed to do in order to get my nourishing dessert. 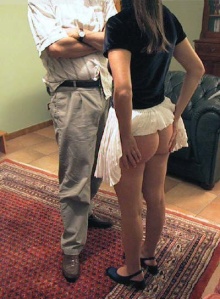 While I fucked him and sucked him with my mouth, he tugged a few peices of ginger garnish and used them to wipe, stroke and rim my anus. He wadded up a bud of the damp, soft yellow-orange strips and tucked it just inside my spincter.

“Ohhhhh! Son of a gun and worse!” I complained. He spanked me to distract me from the infusing burn leaking into me from the garnish.

“Pay attention to what you’re supposed to be doing Constance.”

I tried. Unfortunately for my battered rear end it took me a few false starts to properly adapt to the ginger. Man o Man! My bum is sore tonight! (obviously I failed.) All I can say is I’m thankful Mark didn’t bring any paddles with him, because his hands were quite ouchie enough thank you every much. Let me just say from past experience that “Paddley nine” is much more vigorous than “Spankty nine,” and spankty nine was all my butt could take today.

Once I did adapt though, my attentions to getting him off became some what frantic. Damn if he didn’t use kegels and breathing to hold out too! I worked hard. In earnest. I could feel the sensations tremble through his body and then his breathing try to still them. I knew I had him when he stopped rubbing my bottom and pressing my cheeks together to torture my ginger filled anus, and resorted to sustained whole hand grasps that just got tighter and tighter until the trembling shudder shook through him and I tasted the first jet of his cum. The next three spasms were hard, making his whole body shudder and tremble, then I was able to gently suckle and pull the remaining eight or ten jets and then bubbles from him. My mouth loved his shaft while my fingers kneaded his balls and stroked his anus and perineum until the last most minute contraction was history.

“Son of s bitch !” he chuckled once recover set in.

“Mmmmm.” I nodded resting my face down on the cleft of his left groin breathing his earthy essence as I did. I tasted last night’s feta cheese salad and chicken in the remnants of cum that lingered in my mouth. I could have rested there with him like that for hours, even though my anus was on fire. A nap here now would be perfect I told God. Since the very first time Mark let me and then guided me when I tried to give him head, so many years ago when I was so young and his bride, the act of making him come before he can make me do it has always been special for me. It’s both a privilege and a power. Today, he let me revel for a comfortably good stretch of time. No doubt he had to while he recovered, but sadly it wasn’t really long enough.

Far too soon his fingers worried the ginger he had balled up and wadded in me. The quickly worked it out, and the stroked me with a fresh leaf.

“Come here,” he tugged and commanded my pussy and every thing else down there closer to where he could eat them. His tongue stroked and worked first my pussy, before my clit, and then took a leaf of ginger and rimmed my anus with it.

“O! Honey! Oooooooooooooooooo!” holy old piss pots who thought of that! My mind reveled, and then he did it again.

I’ve been figged lots of times in the last year or so since we started exploringanal play, but, I’ve never been “flrimmed.” That would be figged and rimmed and licked all at the same time. Ok so I’m making up words, and surely there’s probably a better one out there… but that ginger garnish we’d never even seen until this past summer in Orlando and now is every where we look when we just do ordinary grocery shopping, is just amazing when ‘garnished’ on the tip of his tongue … well I think you get the idea. Go for it folks. Seriously.

When he finally chewed away the ginger sheath and put his tongue to work eating the juices my pussy made for him, I was so far gone. My body shuddered and threatened to come three times, each one answered by “don’t you dare!” spanks, before the inevitable final climax took me.

I grinned and hugged his legs tight to me when he chuckled and pressed his tongue up inside me tasting and feeling how much he owns and controls even the most intimate parts of me.

We both collapsed for a while and relaxed in what amounts to a very cozy position. If work wasn’t looming, we probably would have fallen asleep.

I was back at work by 1:30PM. Got home at 7PM and will head to bed for actual sleep in another 10 minutes.

To answer the questions anout last week. LOLOLOL Yes folks, we both really did go back to work.

p.s. Mark has & does occasionally use cialis and is not ashamed to admit that being in his mid 50’s does have an effect on his desired ‘performance’ sometimes. I personally like him aux natural when it comes to giving head. It’s much more sensual to deep throat with him firm but not rock hard. Both are OK, but I prefer firm to rigid for that any way. (OK now I’m really gonna get it for sharing that *g*)

Also, since you already are here  🙂 I put a very comprehensive How-To together, for all the people out there who want to get in domestic discipline – I received and receive so many question in emails, that a guide might help some of you out there.

With this goal in mind, I wrote around 200 pages – some chapters about the lifestyle, some on the life in a domestic discipline relationship, a detailed description of implements, and much more. And of course the guide contains info on how to convince your significant other -this is key. Each chapter contains valuable tips and habits that you can apply to your life. I wrote this book because there are no such books out there (!), and … we have developed our relationship with Domestic Discipline so far, that I now consider myself as an expert 🙂 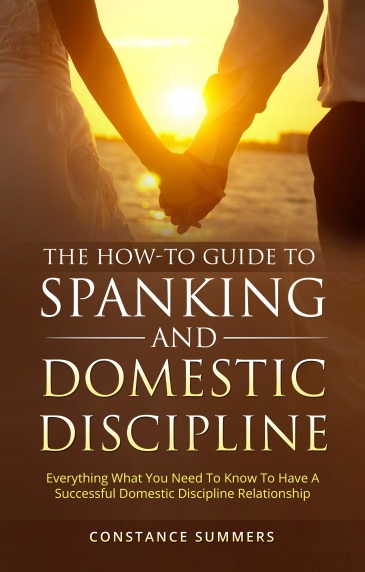